In the year 1945 – the war had just ended – the Port of IJmuiden was severely damaged. There was a lot of work to do before the port could fully function again. The same applied to the fishing fleet, part of which had fled to England. Another part was seized by Germany. One by one the ships returned to the Port of IJmuiden and had to be made suitable ​​for fishing. 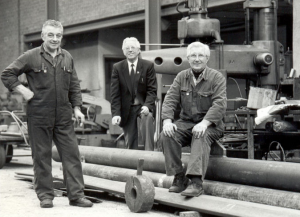 It was at that time that Leendert Venus and Elbert de Waard (both mechanics) decided to start an engineering company. They named it “Venus & de Waard Engine and Machine Repair Workshop”.